Amongst my readings on health and fitness books, I sometimes like to read other genres from interesting people I discover through podcasts.

I first heard Gad Saad on the Joe Rogan Experience in July 2017. He appeared four times prior to that. And also three times subsequently. With his latest being on 11th May this year.

I love the way he seamlessly explains the issues we have in todays world with the current woke culture. Particularly how it limits our freedom of speech, and dumbs down arguments into tribes. 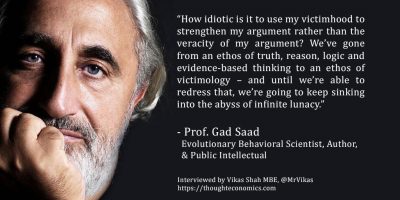 One of the reasons it was of so much interest, is because I’ve tried arguing against these tribes before. But inevitably I find my words tangled and unable to fight out of the wokespeak quagmire.

We need more talk like this. We need more rational people like Gad Saad to stand up and be heard.

He talks succinctly about the way universities and our education systems are having their freedom of speech eroded against the minority who shout the loudest. Against the offended minority who believe their hurt feelings are a reason to shut down any discussion which does not agree with their narrative.

If you’re already worried about the cultural direction we are heading in to, be prepared to be even more concerned after reading this.

There are many quotes I could take from this book. It is a plethora of rational speak, sensibly argued without hyperbole, which gives me hope that maybe the human race is not doomed.

Here’s the beginning of Chapter Seven, which I feel sums up the problems we have as a species in todays world:

How to Seek Truth

A fundamental feature of an individual’s civic duty in a free society is to be an informed citizen on issues of Societal importance. This is not an easy task to accomplish as most people succumb to several cognitive and emotional traps along the way.

First, humans are cerebral misers; namely they are too intellectually lazy to collect relevant information on a given issue, and instead prefer to form opinions while expanding as little mental effort as possible.

Second, the information landscape is laden with data of varying levels of veracity.

Third, once an individual has committed to a position, it is notoriously difficult to get him to consider opposing evidence”

Clearly this points towards tribes we see in identity politics. Left vs right. Racial tensions. Sex and gender labels, etc. Once a person has taken a position on any of these, the intellectual lazy will continue to spout their phrases which are unarguable, sticking to that position as if their life depends on it.

Whereas what we should all be doing, is our civic duty as a human to inform ourselves of all sides of any argument. To not lock ourselves into one tribe or another.

But this is a health & fitness blog. So let me try to give a real world related example.

I was talking to my good friend recently who is the same age as me. He believes ageing is something which happens and there is nothing you can do to reverse or stop it. Whereas I believe although age is a factor, there are definitely things you can do to mitigate ageing.

He said to me, he does not think it’s healthy for a man of my age to be out at 8am in the morning playing football on a hot day.

This statement could very well be correct if you are referring to the average western male of similar age who is likely overweight, under-nourished, and with a lifetime of negative behaviours behind them.

But I am none of those things. Ok, arguably the lifetime of bad behaviours is there. But I have spent the last 5 years reversing those behaviours, replacing them with good ones.

My friend has taken the position that ageing in the traditional sense is inevitable. And in fact intense exercise is damaging me, because I am over 50. I tried to argue that he is correct if you take the average 50 year old. But this does not mean that everyone is average, and it does not mean that age is a limitation. I should have mentioned Tom Cruise as an example.

His bias based on everything he has ever seen, says everyone gets old and dies with some kind of age related degenerative illness. His narrative and experienced tells him ageing is a fact. Maybe in five years time, my efforts to reverse ageing will be more clear.

Gad Saad coined the term Ostrich Parasitic Syndrome (OPS) when he realised that tribal “idea pathogens” were causing more and more people to reject reality. Here’s how he defined this terrible attack on reason: 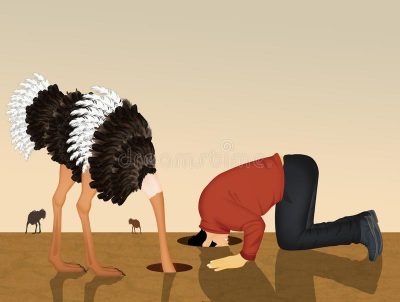 “This disorder causes a person to reject realities that are otherwise as clear as the existence of gravity. Sufferers of OPS do not believe their lying eyes. They construct an alternative reality known as Unicornia.

In such a world, science, reason, rules of causality, evidentiary thresholds, a near infinite amount of data, data analytical procedures, inferential statistics, the epistemological rules inherent to the scientific method, rules of logic, historical patterns, daily patterns, and common sense are all rejected.

Instead the delusional ramblings of an OPS sufferer are rooted in illusory correlations, non-existent causal links, and feel-good progressive platitudes. Ostrich Logic is always delivered via an air of haughty superiority”

It would seem my friend is suffering from a little OPS. He is refusing to believe what he sees in front of his eyes (me looking younger), whilst ignoring an infinite amount of available scientific data showing the damage of a sedentary versus active lifestyle.

The Information Age of Enlightenment

Which takes me onto another issue I have with the modern world, being: If we have all the information known to man at our fingertips; why are our world leaders lacking in moral value; and why does the world seem to be full of ill informed people angry at things they do not understand?

The original age of enlightenment, which began in the 17th century with scientific discoveries and the ability to write and share these discoveries, is where the human race exploded with innovation and growth.

This epoch in time at the beginning of the 21st century should be of exponentially growing intellect and enlightenment. Whereas we seem to be moving in the opposite direction.

Theoretically we should be seeing another explosion of intellect due to the internet and information sharing. But instead we have been thrown backwards into a chasm of dumbing down, where the loudest voices who used to be on the fringes are being listened to. Infuriatingly, government policy is even being drawn up around this unscientific madness.

The most worrying discovery from this book was understanding how freedom of speech inside universities has been eroded to a dangerous point. Where people are afraid to speak up and discuss the issues of today in an orderly and civil manner without being labelled a ‘ist.

How to Fix The Universities

Gad Saad’s talent is his ability to speak out against this erosion of common sense with well thought out and clearly articulated ideas, such as:

“…. our universities should recommit themselves to the pursuit of academic excellence and kick identity politics (and its cult of “diversity, inclusion and equity”) into the dustbin of history. No one should have to apologize for being white, male, Christian or heterosexual – or feel “pride” in their sexual orientation. 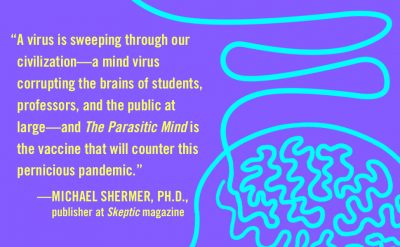 Immutable characteristics should not be the subject of either pride or shame, and we should neither inculcate or placate an ethos of perpetual victimhood and indigent offence.

We should stop coddling students and provide no allowances for trigger warnings or safe spaces, no indulgence of the foolishness of “cultural appropriation” or “microaggressions”. These are nonsensical concepts that embolden weakness and fragility.

Instead, foster an environment that promotes intellectual and emotional strength.”

This all seems glaringly obvious for us sane, rational common-sense thinking primates. But seems to be totally missed by the vocal minority with the loudest, most indignant and offended voices.

We who see this erosion of rational intelligence must stand up to the madness of these crowds. We must learn ways to argue against the modern day “idea pathogens”.

I will leave you with two quotes from history which must be heeded:

“First they came for the communists, and I did not speak out. Because I was not a communist.

Then they came for the Jews, and I did not speak out. Because I was not a Jew.

Then they came for me, and there was no one left to speak for me” Quoted by Martin Niemoller, German theologian.

“A time comes when silence is betrayal” Quoted by Martin Luther King Jr.

Together we can save humanity. We must simply never give up. The human race needs you to be informed and open minded. In this day and age, there is no reason why this cannot be.